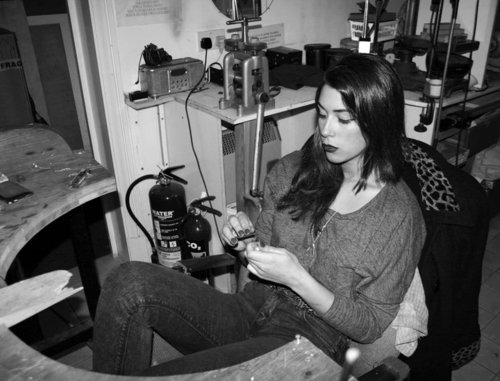 We can all become a little jaded about paraphernalia we see all too frequently, especially when you look at scores of jewellery on a daily basis. But once in a while a designer will come along and reignite your love for self-adornment and all things shiny, producing a collection that will make you wonder how it was made, how the concepts were thought up, and appreciate how beautiful the natural world combined with creativity can be…without trying too hard. When Rachel Boston arrived at our Brighton store to deliver her collection she did just that.

Rather than give you a wikipediaesque rendition of her background I thought we’d skip straight to the good stuff and thus Rachel has kindly allowed me to interview her about ‘The Protector’ collection available now in our Brighton Store or online: Enjoy the stag beetles, scorpions and other coleopterological (beetle) wonders!

Where are you based at the moment Rachel?

I’m currently based in Bethnal Green, East London where I work and live. I’ve lived in London my whole life but Bethnal Green is definitely my favourite place I’ve lived. It’s got so much life and things to do around there but at the same time it’s still peaceful and quite scenic with Victoria Park and the Canal right by me so I feel I’ve got the best of both worlds.

When did you decide you wanted to design jewellery?

I’ve been making jewellery in one sense or another since I was about ten when I first took the pliers out of my parent’s toolbox and would deconstruct my jewellery and put it back together again adding bottle caps or little charms. I didn’t ever thinking about making a career out of it it until I won a school prize for Design and Technology which made me start believing in myself and thinking about studying jewellery design at University. My father was a big influence in it as well as he works in the diamond trade so his own personal interest in jewellery is probably what first initiated mine.

What inspired your collection ‘The Protector?’. Can you tell us a little bit about that?
The Protector was inspired by the incredible armaments of beetles and scorpions. I wanted to design a collection based on these aggressive looking creatures and turn them in to something refined and elegant but that still had an element of danger. The pieces themselves aren’t dangerous but their forms make them appear so. Some of the pieces are cast straight from real beetle heads so you can immediately tell what they are, others I’ve reworked so they’re more ambiguous, more subtle. I’ve always been drawn to working with nature but I’ve never been one for pretty butterflies or dainty flowers. I like an underdog, and I think beetles and scorpions are beautiful in their own right too, even if it is perhaps slightly more visceral.
Did you use any interesting processes/techniques to make your pieces?
I mainly work with casting at the moment as I prefer the idea of the jewellery coming from something real and natural rather than me trying to replicate through wax carving. I have a work bench in my flat so I make all my masters there so I can work on them whenever I feel inspired or feel a lightning bolt moment coming with a piece. One of my favourite parts of the process is actually sourcing the things I want to cast or use in the jewellery. I went nature shopping yesterday and came back with some great pieces for my next collection including a black bear claw which I’m very excited about.
Favourite piece in your collection?
The piece I wear the most is the Scorpion Sting Necklace. I generally dress quite casually on a day to day basis and I feel like the scorpion sting necklace really steps up any outfit I wear, even if it’s just a t-shirt I instantly feel chic once I’ve got it on.
Favourite piece of jewellery in the whole wide world?

A necklace saying ELVIS my parent’s got me for my 18th birthday which they had made based on a cheap necklace I got from the Elvis store on Baker street when I was 8.

Who inspires you?
I’m totally over inspired. I get inspired from people I meet, people I’ve never met, literature, lyrics, dreams, paintings, random snippets of conversation, films and nature. I try to devour as much as I can so that whatever comes out isn’t based on just one facet of inspiration.
What is your favourite material to work with?

Definitely metal, I’m a bit heavy handed and metal can take a beating or a mistake more than anything else and often look better for it.

I saw you have a bracelet made entirely out of scarab beetle shells.Are they real and how did you make it?!
Yes they were real and actually bought by the incredible Jim Steinman which made me over the moon. I love the idea of older rockers buying my jewellery. It’s definitely tricky to make and something I would probably only do for private orders but the result really is beautiful because the colours of the wing cases are insane, they’re iridescent so the result is quite magical and surprisingly sturdy – the cases can take quite a knock before they even budge.
You spent some time in New York, your favourite city…London or New York?
I love New York a ridiculous amount, the people, the food, the noise, the ability to walk everywhere. But London feels more real to me and is home so will always be my favourite.
Got any exciting new projects lined up?

I’m currently working on my new collection to launch early next year so watch this space.

PREVIOUSDon't be blue! The many colours of Sapphire
BACK TO BLOG
NEXTRetail Jewellers Inspiring Independent Winner 2012!